Medical ethics- not much has changed.

What do an intellectually disables 2 year old and a middle-aged illegal immigrant have in common?  Neither of them can get the kidney transplant that could prolong their lives.

Back in December I came across this article in The New York Times:  For Illegal Immigrant, Line is Drawn at Transplant:  Illegal immigrant’s transplant, cheaper over life, isn’t covered.

The crux of the article, due to his illegal status, an immigrant cannot get a kidney transplant, only a lifetime of free dialysis.  The transplant would cost $100k.  The dialysis costs $75k PER YEAR!

The article talks about the problems facing this immigrant, his family, his healthcare providers, and the healthcare industry as whole with regards to rising costs, irrational constraints, and the ethical decisions that govern care.

Some might say that the man is here illegally and thus entitled to no care at all- he should be deported, end of story.  However, there are safety nets in place for everyone- legal or illegal- that will cover this man’s dialysis at $75k a year.  Wouldn’t it make more sense to spend $100k once and get him the transplant?  The costs of follow-up care and long-term treatment post-transplant are dwarfed by the cost of the dialysis.

This month, currently causing an uproar is the story of Amelia Rivera, a 2 year old with significant developmental disabilities due to a genetic condition, who needs a kidney transplant.  Her mom turned to the internet for support after the Children’s Hospital of Philadelphia said that Amelia wasn’t eligible for the transplant because she is developmentally delayed.  So we ask ourselves, again, who qualifies for life-saving treatment?

The Times article mentioned a piece in Time Magazine written in 1962 about the first dialysis machines, how their use was studied and implemented, and in particular, the moral weight of deciding who gets access to the care that would save his/her life.  The article “They Decide Who Lives, Who Dies” really struck me for how little the debate has changed in 60 years.  The criteria used to pick patients for the treatment included their intellect, their ability to comply with treatment, their ability to support their families, etc.  Dialysis is widely available now, but there is a major problem with access to lifesaving treatments- look at Amelia and the immigrant.  The debate over who gets access to healthcare as a whole is still a moral dilemma in this country.  And what of the immigrant- do we owe him, as a human being,  a life-saving transplant?  What about Amelia?  Doesn’t she deserve to live? 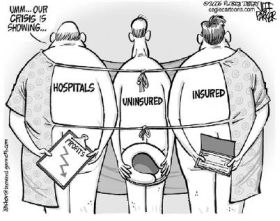 In Amelia’s case, I don’t think her intellect should rule her out from a transplant.  She is early in the process, and her family says they are willing to donate a kidney for her, meaning she wouldn’t be ‘competing’ with others languishing on the transplant list waiting for a scare organ.  No brainer, treat the little girl!  However, what if none of her relatives are a match?  Does that complicate the decision?  Should she be denied a place on the transplant list because of her intellect?  Criteria like age, ability to comply with treatment regimens, and overall health are used to rank people on the transplant list.  Should intellect be as well?  Who decides that?  How do they decide?  I would be hard pressed to agree that her intellect and its implications should weigh in the decision-making process.  However, her genetic disorder does dramatically alter her life-expectancy (average life-expectancy is between 18 and 34 years).  That may be a more pressing and relevant factor to consider.  What about quality of life?  Can we judge how her intellect affects her quality of life?

In the case of the illegal immigrant in The Times article, I think it’s a no brainer that paying for the transplant is the best thing to do- even if just from a pragmatic standpoint that it would save the system (which is already willing to cover the dialysis) money over the long-term.  Morally, I would have trouble telling anyone that they do not deserve a life-saving, life-improving kidney transplant.

As to the drain that the uninsured pose to our healthcare system, be they citizens or immigrants, illegal or otherwise, I think the answer is to provide care for everyone.  Will it cost money?  Yes.  Is it the right thing to do?  Yes.  Do I need such insurance right now myself?  No, but I know people who do, and I know one day, I might.  If you think that your private insurance makes universal healthcare something you won’t ever need, think again.  Most personal bankruptcies are caused by medical problems (62%), and most of those people had health insurance (78%) (Source).  You are not immune.  You are one catastrophic illness, either your own or a loved one’s, away from being the subject of a NYTimes article.  Why wouldn’t you make sure there were enough life rafts for everybody?

I do not envy the doctors and health care providers that are faced with making these decisions.  How to you tell a patient or a child’s family that they do not qualify for a treatment that will save their life- either because of money, age, health, immigration status?  I cannot imagine being in the position to make that decision or share that kind of news.  And what of being on the receiving end of such bad news?  My heart breaks for Amelia and her family.  I pray that the immigrant in the Times article gets the transplant he needs to improve his life, and save our healthcare systems tens of thousands of dollars a year that could be used to treat other patients.

ETA:  This article from ABC News does a nice job of talking about how Amelia’s condition might influence decisions on her eligibility for transplant- regardless of her intellectual disabilities:

Wolf-Hirschhorn syndrome occurs in about one in 50,000 live births. Health problems can vary from child to child, but some serious impairments include seizures, hearing loss and eye malformations, as well as kidney, brain and skeletal abnormalities. Heart disease and frequent lung infections are also immune deficiencies also reported.

Patients can be denied an organ transplant for a variety of reasons, according to the American Society of Transplant Physicians. Transplantation will not be offered to those would could be harmed by the surgery itself or by the immune-suppression that is required to prevent organ rejection.

Patients with weak immune systems or a high risk of infection, such as some children with Wolf-Hirschhorn Syndrome, cannot be immunosuppressed, according to those guidelines.

Some doctors have reported that patients with the syndrome have difficulty with anesthesia because their heads and mouths tend to be small, making it hard to place a breathing tube during surgery.

Patients with severe heart disease may have an unacceptably high risk during surgery. Also, those who are not expected to live five years may also be denied a kidney transplant.

Patients with severe intellectual impairment may be considered for transplant if the benefits outweigh the harms, say guidelines.  Source.

2 responses to “Medical ethics- not much has changed.”