I saw this video here.  It’s frightening.  It’s temperatures from over 1,000 meteorological stations around the world over the past 63 years.  Blue is cooler, yellow/orange is warmer.

63 years is less than my father’s lifetime. That is how much things have changed since he was a boy.

The other evening at dinner, we were speaking with a friend who emigrated here in her teens.  She was surprised to hear that this bitterly cold weather used to be a regular occurrence during winter.

I recall being in elementary school and attending a winter fest on a local lake.  People drove their cars, trucks, and snowmobiles out onto the ice.  There was ice fishing and bonfires.  The ice was so thick driving truck on it was perfectly safe.  It’s been decades since such an event was held.  Local bodies of water barely freeze well enough for kids to ice skate, never mind snowmobile.  We never see kids ice skating on lakes and ponds any more.  Towns have built little rinks for skating, and even those don’t readily freeze.

I laughed out loud!

Source: A friend shared this on Facebook. If you know to whom it should be attributed, pleases comment!

Elmo, Beaker, and Animal are spot on.

I’m so glad you asked. 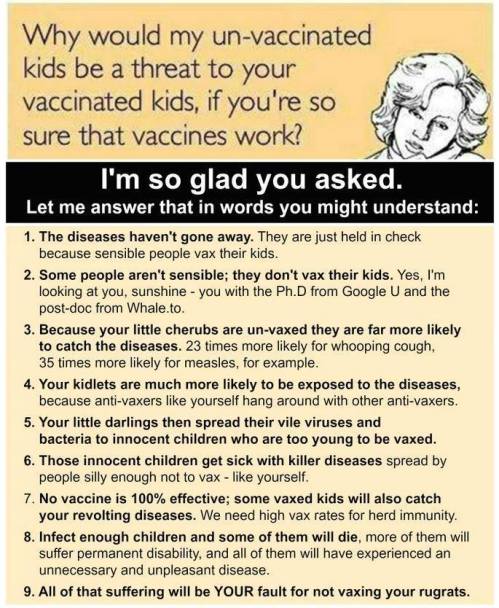 If you want the less friendly, sarcastic version, click here.

This year Mac and I are going to do something AWESOME for Valentine’s Day.

We are going to spend it at the Hayden Planetarium at the American Museum of Natural History!

The tickets were a bit of splurge (considering last V-day was take out at home), but when I found out about the event, I couldn’t pass up the opportunity.

Romance Under the Stars

Celebrate Valentine’s Day with a unique NYC experience only at the Hayden Planetarium! Join us for a cocktail hour, complete with open bar, champagne, and hors d’oeuvres, along with the music of the Josh Rutner Quartet. Then join Hayden presenters Lydia Maria Petrosino and Ted Williams in the planetarium for a view of the night sky. Sit back and enjoy some of the greatest romance stories from the ancient celestial past.

We have a membership to the museum, which means we can park for only $10.  Throw in free babysitting from my mom, and it won’t be all that expensive.

I haven’t been to the Hayden Planetarium in YEARS (like since high school), so I’m really excited.  Mac is too!

The only thing that could made this night even better is if Neil deGrasse Tyson is there.

There are still tickets left if you are interested! Click here. (If you’re going, let me know so I can briefly say hello and then leave you to your galactic romance.)

So much for Global Warming!

Can we please just say “Global Climate Change” so that the stupid amongst us can’t deny it any time it gets cold? 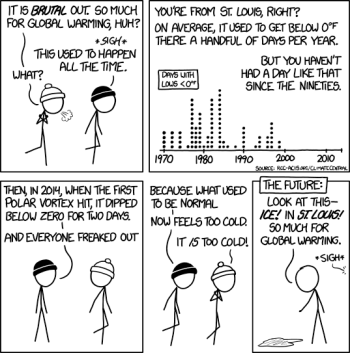 Mac posted the following on FB the other day with the caption, “A very special time in a young girl’s life – her first gaming dice. (First d20 roll was a 17)” 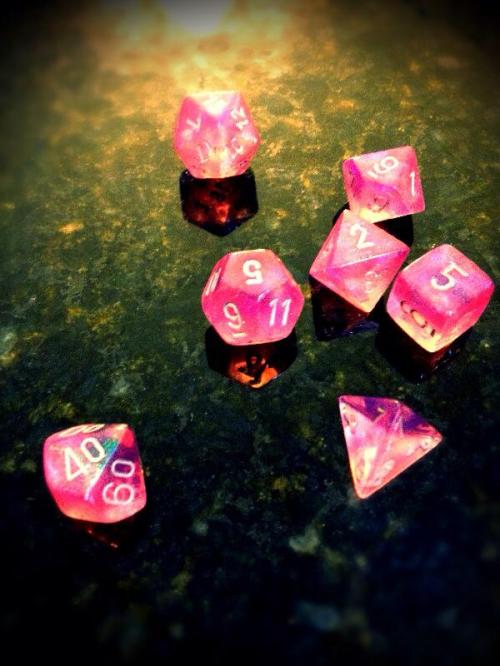 I responded with, “And thus another generation is indoctrinated.”

Mac’s retort made me laugh out loud, “You get country music and Catholicism. Let me have this.”

In a FB discussion a while ago it was implied by some (who don’t know me) that I’m a stick in the mud, dream crusher of a mother who didn’t “let” her kid believe in Disney princesses, unicorns, dragons, and Bubble Guppies- as in, my 3yo knows those things are pretend/make believe and it was horrible of me to disabuse her of the notion that cartoons actually exist.

If you know the origin of this image, and the person I should credit, please let me know.

Just because those things are pretend/make believe doesn’t mean she can’t enjoy playing make believe. She knows she can use her imagination to think up anything at all, not just what marketing execs at Disney want her to think about when she’s parked in front of the Disney Channel. I’m glad that when she plays princess, she just thinks up what kind of princess she wants to be- and isn’t just choosing which Disney princess to be.

However, what really gets me, what I fail to fathom, is the notion that only pretend things hold wonder.  Have you seen a Cheerio under a microscope?  What about a flower petal?  Salt? Hair? It’s pretty neat.

Examining whatever she could find under a microscope. Even boring stuff can be exciting when you magnify it 200 times.

The actual world, and all the things that actually exist within it are wondrous. Stars and comets, Princess Di and Queen Noor, dinosaurs and narwhals, Sally Ride and Jaques Cousteau- all real and all wonderful and all amazing and all more enthralling than anything Disney might insidiously market to my kid.

Disney has it’s whole “When you wish upon a star” mumbo jumbo, but it was pretty freakin’ awesome to stand in our driveway and watch the Minotaur rocket shoot across the New York sky as it launched from Wallops Air Force Base (click on the link to see the schedule of launches and the map of where the launches are visible).  To then run inside and watch videos of the launch from the ground, learn about rockets, figure out why it looked the way it looked in the sky, etc. was also awesome.  To have Mabel ask for pictures of the rocket launching to take for show and tell was awesome.  To spark her interest in space an space exploration was awesome.  Disney can’t top that.

Distinguishing the real from the make believe doesn’t steal her child-like wonder, it opens her child’s eyes to the wonder that is around her every day, even if most grownups are oblivious.

Coffee: Gatorade for parents and scientists

Everyone who drinks coffee knows that it makes you have to pee, right?

You may also be aware that scientists are heavy coffee drinkers.

Thus, when I am in meetings that run longer than an hour and a half, starting around the 50min mark, people start taking ‘bio breaks.’

This anecdata would support the idea that coffee/caffeine dehydrates you by acting as a diuretic.

Well, this is why anecdata is dangerous to rely on.

I heard it on NPR (who did good by linking to the original PLoS study in their article!) that, caffeine, “when consumed in moderation by caffeine habituated males provides similar hydrating qualities to water.” (Source: Killer, Blannin, and Jeukendrup PLoS 2014 since PLoS stands for Public Library of Science, the article is freely available for all to read!).

It’s practically a health drink!  It’s like Gatorade for parents and scientists!*

Check it out on NPR here: “Coffee Myth-Busting: Cup Of Joe May Help Hydration And Memory”

At PLoS here: “No Evidence of Dehydration with Moderate Daily Coffee Intake: A Counterbalanced Cross-Over Study in a Free-Living Population”

*Disclaimer:  DO NOT dump an urn of hot coffee over the head of anyone as a celebratory gesture as is frequently done with Gatorade. Coffee is hot and can result in severe burns.

This is what my car windshield looked like this morning.

Thankfully, I only saw it in this photo Mac took, as he was kind enough to start my car and melt it off before I had to leave. I think his reaction pretty much sums it up.

“What kind of crazy Narnia-ass weather did we have last night?”– Mac

Amazingly, I am the mom of a 4 year old!

Mabel turned four last week.  She wanted a birthday tea party, and has been saying so for months. This was the first year she had actual opinions on what she wanted her party to be like. She chose the theme, the menu, her outfit, and the guest list.  Thankfully, she didn’t have any extravagant demands.

My mother-in-law got Mabel this tea party game as a birthday gift.  She was inspired by the game in her choices for the menu, namely heart-shaped peanut butter and jelly sandwiches, grapes, and tea.  She also requested a birthday cake from Baskin Robbins, so I was off the hook for baking too!

As I have for the past several years, I recycled birthday decorations (see Mabel’s second birthday and third birthday here).

The things I picked up are pictured below.

I’ve written before about my #scimom guilt around using helium for something as trivial as a birthday balloon.  To avoid that situation, I picked up these balloon sticks.  It meant I didn’t have to pay for the balloons to be filled with helium, and they last much longer since floating isn’t necessary (as of this publishing, they are still inflated 10 days after they were inflated).  They can be reused, and since I ordered 12 dozen of them, this will now be our go-to party balloon solution and should last us until both kids turn 30.  It also made for really cute decorations when we affixed them to the chairs with zip ties.  These are the polka dot balloons I purchased. Each girl took a few home with her.

As an activity, I purchased this tea pot picture frame craft set. Once the girls were finished making their frames, they went into the living room where Mac took photos of them with the birthday girl.  He then printed out the pictures and we put them in the frames for the girls to take home as a party favor.

The other party favor were these party hats from Party City.  They were less than $2 a piece, and because Mac was able to order them from inside the store, the shipping was free!

Of course, no tea party would be complete without a tea set.  I did a fair amount of research on Amazon and ultimately opted for this kid’s ceramic tea set.  It was Mabel’s birthday present from us.  It is child-sized, but it isn’t miniature like a doll’s set (You can see the size relative to a dessert plate in the photos above).  It even came with little spoons and napkins, and was inexpensive enough that if pieces break, it won’t be a big waste of money.  While she and her friends were having their photos taken in the living room, I laid out the tea service for four.

The girls enjoyed serving themselves tea- which spilled all over the place- and even tolerated Nemo crashing the tea party.

The party was only two hours, and that was enough time for the craft, the photos, tea/lunch, and some playing.

Mabel enjoyed herself, and that’s what matters most.  She also did a pretty good job of being a hostess- although there was some conflict over who got what colored seat at the table.  At the end of the party, she didn’t want her guests to leave, but there were no tears or tantrums.

I enjoy making a fuss over birthdays!