I Tweeted about this the other day, but it was awesome enough it deserved a post!

A new spin on crowd-sourcing science:  coming up with signs for science terms so the deaf can communicate science!!!

Pushing Science’s Limits in Sign Language Lexicon appeared in the New York Times last month.  I missed it, but my mom saw it and told me to look for it.  I love it!

Several groups are turning to crowd-sourcing to come up with signs for science terms- and save those using sign language spelling out all the complicated words that my computer’s Spell Check doesn’t know.

Wanna suggest some signs?  Check out the ASL-STEM Forum here!

When I went to get coffee in the kitchen at work, the home section of the times was sitting atop a table- probably because, just like me, every other scientist did a double take at the headline:  “The Beauty of Bacteria”

I didn’t really need convincing, but the image accompanying the article really piqued my interest.  It probably will pique yours too, so here it is: 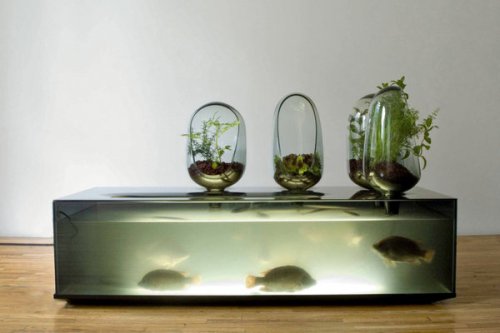 Household objects inspired by biology include Local River, a system by Mathieu Lehanneur for raising fish and plants at home. Source: NYTimes

Maybe my interest is easily piqued because I did a bioengineering post-doc and spent my days coaxing rat hepatocytes (liver cells) into metabolically active and structurally accurate organoids, but the idea of coaxing biology into a form and function that is useful for any purpose is intriguing.

Definitely click the links and read the article.  There are tons of cool design concepts- here are some of my favorites:

Guilt-free and seamless leather grown from mouse cells to form a little coat.  Why just eat shmeat, when you can wear it?!

A table lamp that is powered by bacteria and moss- biophotovoltaics.  I would LOVE to have this.  I’ve been really wanting a succulent garden for indoors, and this table, with it’s little pots of moss would be so cool.  That said, I doubt it’s childproof.

To see the slide show accompanying the article, with lots of other cool ideas and images, click here.

The other day, The Times ran an article, “Up the Career Ladder, Lipstick In Hand,” about this study in PLoS ONE on how makeup changes people’s perceptions of a woman’s competence.

I was really surprised by the results.

“In two studies, we asked viewers to rate the same female faces with or without color cosmetics, and we varied the style of makeup from minimal (natural), to moderate (professional), to dramatic (glamorous)…The results suggest that cosmetics can create supernormal facial stimuli, and that one way they may do so is by exaggerating cues to sexual dimorphism. Our results provide evidence that judgments of facial trustworthiness and attractiveness are at least partially separable, that beauty has a significant positive effect on judgment of competence…”  Source: Etcoff, et. al. PLoS ONE 2011.

Here’s an image from the first figure of the paper: 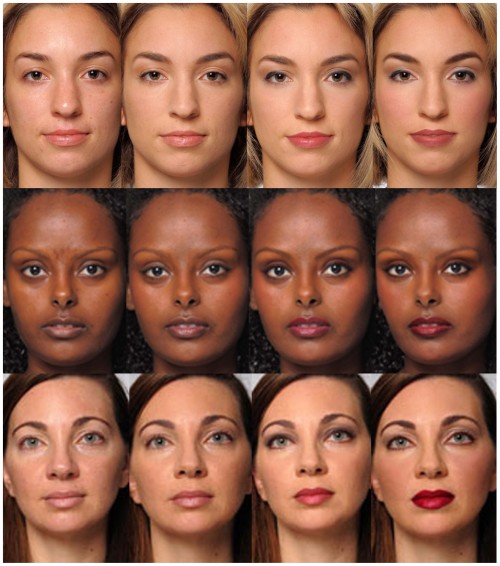 Models without makeup and with styles of makeup from minimal (natural), to moderate (professional), to dramatic (glamorous). Source: Etcoff et. al. PLoS ONE 2011

In my workplace- a biotech company- I would say that most of the women I encounter are either without makeup or with ‘natural’ makeup at most.  If someone shows up at work with ‘professional’ or ‘glamorous’ makeup on, it would prompt questions about what the occasion was that had them so done up.

I myself wear ‘natural’ makeup pretty much everyday, and definitely every work day.  I used to wear no makeup at all, but in grad school, thanks to lack of sleep, and perhaps age, it got to the point that I was always looking tired.  Some concealer, nude shadow, and mascara go a long way to hiding my lack of sleep.  I wear it not to look more competent, but to feel more comfortable, hoping that I don’t look as exhausted as I feel.

I was surprised that beauty in this study correlated with competence.  I wonder if competence really encompassed what the subjects were perceiving.

Do you think makeup changes how competent the women in the image appear?  Do you wear makeup to work?  If so, what category do you fall into- natural, moderate, or dramatic?  Why do you wear it- to appear more competent?

Stop tapping/slurping/breathing I have Misophonia!

Have you ever read an article online or in a newspaper or magazine about a disorder or illness and recognized yourself?  Yesterday, I did.  I have self-diagnosed myself with Misophonia.  I would also bet that once you know what it is, you will recognize people you know who have it, maybe even yourself.

The New York Times article is this one:

When a Chomp or a Slurp Is a Trigger for Outrage

So, what is misophonia?  According to Wikipedia, it’s

…”literally ‘hatred of sound,’ is a form of decreased sound tolerance.  People who have misophonia are most commonly annoyed, or even enraged, by the sound of other people eating, breathing, coughing, or other ordinary sounds. They are not normally annoyed by sounds that they themselves make. Reactions to these sounds are not limited, however, to just loud eating noises; people with misophonia find themselves affected by all kinds of noises.  Such reactions are also involuntary.”  Wikipedia

That describes me pretty well.  Heavy breathing, slurping, chewing, swallowing, tapping, loud typing, snoring, teeth grinding, dripping water, background noise like running air conditioners or the compressor of a refrigerator, all are things of which I am acutely aware.  They annoy me.

The first instance I really remember of it was in high school.  The kid behind me in chemistry was snacking on trail mix.  The sound of his chewing and swallowing was driving me to distraction.  I tolerated it as long as I could, then turned around, snatched the bag away from him, and said, “You can have this back after class.”  He just looked dumbfounded, but didn’t argue with me.

When I read about the list of coping mechanisms, I saw my own behavior:

People with misophonia tend to use varying coping methods. Most people will simply avoid the sound and leave the room/area altogether, whereas some will try to block the sound with earplugs, music/listening to music on headphones and in more extreme cases, not socialise for fear of hearing the sounds. It is important to note that sensitivity to the offending sounds are often far more severe when the origin of the sound comes from a person that is emotionally connected to the sufferer.  Wikipedia

In my current job, I’ve had to close my office door (which is not commonly done by my colleagues) because it was the only option other than screaming at the guy who sits right outside my door, “STOP TAPPING YOUR FOOT!  IT MAKES ME WANT TO SHOVE A PENCIL IN MY EAR!”  Thankfully, there was a rearrangement of the outer-office and that guy moved across the room, so I can leave the door open and no longer look like a biyatch.

I contacted the Facilities Department to see if something could be done about the compressor for the cold room next to my office because it kicks on frequently and is incredibly loud to me.  They said there’s nothing they can do.

I use headphones to try and drown out the sound of my officemate chewing so loud I examine his lunch wondering what in the hell a man can eat that generates that much noise.

I cannot sleep without earplugs.  I have half a dozen pairs in my house and in my toiletries bag for when I travel because every sound I hear when I lay in bed- my husband breathing, my daughter dreaming, the dog’s tags tinkling, the refrigerator coming on, traffic on the road, crickets chirping- all keep me awake.  For a while a white noise machine worked, but eventually even that became too loud.

My dog knows the command, “Stop licking,” because I cannot bear the sound of her tongue and her mouth when she does it.  I’m pretty sure my husband has some kind of swallowing disorder since the sound of him swallowing is different than anyone else I’ve heard (it sounds like he’s swishing the liquid around in his mouth before swallowing).  When he really wants to annoy me, he makes mouth noises on purpose.  I cannot stand having a phone conversation with my mom if she’s drinking something- the phone amplifies the sound of her swallowing.  I can’t talk to people on the phone while they are eating for the same reason.  During lab meeting, where lunch is served, I intentionally sit as far away from my supervisor as possible because it sounds to me that eats like a pig at a trough and I want to gag.  On an airplane, the engine noise makes me want to plug my ears it is so loud.

I posted a link to the NYTimes article on Facebook, saying “I think I have this.”  My sister commented, “You definitely have this.”  A friend from grad school commented, “I just read this article in the NYT and thought of you! :)”  So I guess my self-diagnosis is dead on.

It’s ironic because I also get teased for being hard of hearing.  I can hear someone speaking, but I can’t make out what they are saying.  I have to actively listen, then basically guess what they said based on what rhymes with what I actually heard and makes sense in this context.  I went so far as to have my hearing checked and I hear perfectly.

After reading this article, I actually wonder if I hear too much, or too well and I can’t focus in on the speech because of all the background noise.

Do you have misophonia?  Do you know someone who does?  Have you ever diagnosed yourself from an article?