The science of racism?

In honor of Martin Luther King, Jr. I thought it was time to admit that I’m racist.  I’m white, and I’m racist against blacks and Asians, mostly, not so much Jews (although they are arguably Caucasian).  I’m thinking, chances are, you are racist too, against people who aren’t of your race. 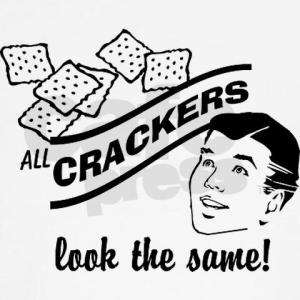 Now, as a biologist who took a biological anthropology class with this guy in college, I am fully aware that there is very little genetic basis for our racial designations.  I mean, if we share 97.5% of our DNA with mice, and 99.9% with apes, how different could humans be from each other?  Turns out, not very different at all- we differ from each other by about 0.01% of our DNA.  Those small differences can mean a lot of diversity in how our genes function, but in reality, we humans are more genetically diverse within out racial groups than we are between them.

That pattern of diversity is why a black couple can give birth to a white baby, or why one twin could be black and the other white.

Even though race is genetically irrelevant, as a social construct, it’s quite germane.  I first realized I was racist in graduate school.  I was walking on the campus of my Ivy League University with VERY few black students.  I saw a young (college-age) black man in a white T-shirt, black pants, and sensible black shoes.  I took one look at him and thought, “He works in the dining hall.”  I walked on, and then had a moment…

Why did I assume he worked in the dining hall?!  How racist was it to assume that a young black kid mustn’t be a student, he had to be a dining hall worker?  Very racist, I realized.  I made the assumption because my brain takes lazy, racist shortcuts.

It was a fact that the majority of dining hall workers on campus were black.  Yes, I had seen many dining hall employees take off their ugly uniform shirts, leaving them in the remainder of the uniform- T-shirt, black pants, sensible black shoes.

Truth be told, when I realized how racist I was, I was ashamed of myself.  I’d always been open to meeting new people, had a diverse group of friends, etc.  Heck, the majority of my college friends (from a variety of ethnic backgrounds) had worked in the dining hall!

It was simply a lazy, racist, shortcut that my brain made.

There are other things I do/think that make me take notice of my racism.

For instance, I have to make a concerted effort to recognize the women who paint my nails when I go for a mani/pedi.  Over the years, I’ve had places that were big and busy- with a dozen nail technicians.  The place I went to in grad school had mostly Spanish-speaking technicians (I don’t know where they were from) with long, black hair.  The place I go to now has all Asian technicians (I’m not sure what nationality they are, and I’m not worldly enough to be able to identify their language).  What makes it even harder to recognize which of the women did my nails (other than the fact that all I can see of them for most of the time is the top of their heads) is that both places have employees wear uniforms!  There is no remembering ‘red shirt’ or ‘denim vest’ to help me find her with her tip.

So, basically, when I go to get my nails done I feel like a “they all look alike” racist.  There is a scientific basis for my inability to ID my nail tech when all the techs are the same race as one another, and a different race from myself.  Turns out, it’s just the way our brains work– we are less capable of remembering and distinguishing between the faces of people who are not of our racial group.  I still feel like a schmo for having to sit in the massaging chair memorizing earrings or names on name-tags so I can leave the appropriate tip to the appropriate person.

Once I realized I was racist, I took steps to compensate for it.  Now that I know my brain will take these shortcuts, I try to recognize them for what they are- generally irrelevant and racist.  I don’t know that it’s possible to not be racist- there are obvious differences between races, and even little kids notice.  Kids don’t necessarily care, but they notice.  For instance- this is my toddler (front row, blonde hair) at story time at our local library, where she was much more interested in that little girl’s braids than the storyteller. 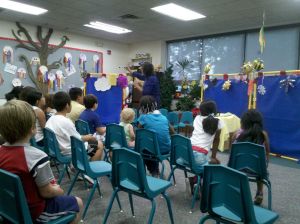 A few years ago I was taking my niece (technically my cousin’s daughter, but for most intents and purposes, she might as well be my niece) to the aquarium in Boston.  We were on the bus with an androgynous black person- I honestly couldn’t say if the person was male or female, and I didn’t particularly notice or care until I saw my niece staring at the person.  I told her it was impolite to stare and she asked me flat out if the person was a man or a women.  I told her I didn’t know.  She asked why they person was dressed “like that” (brightly colored clothes, skin-tight jeans, long dreadlocks, knee-high Converse, etc.).  I told her that the person was probably dressed that way because it’s what they preferred and liked to wear.  It was an awkward conversation, and I’m not sure I handled it that well- mostly because I was concerned that the person could hear us or would notice the conversation and feel uncomfortable him/herself.

As my own daughter grows up, I’m sure I’ll have many more of these conversations.  I was intrigued by this article from the authors of NurtureShock.  I don’t want my daughter to grow up racist, but it seems research shows it can’t be helped.  I hope at least I can help her to recognize when her brain takes lazy, racist shortcuts.  I think it’s pretty clear that frank conversations will be crucial.  For while it may be impossible for kids to be color blind, or fall back on other stereotypes of gender/race/religion/orientation, it seems there is a way to combat prejudice:  From this article on Huffington Post.

It seems we can retrain the biased brain, according to prejudice researcher Patricia Devine. But, these three steps have to take place: First, we need to become aware of our implicit biases. Next, we must be concerned about the consequences of those biases. Last, we should learn to replace those biased responses with non-prejudiced ones–ones that more closely match the values we consciously believe we hold.   Source.

I hope that living in a diverse community will help my daughter to make a diverse group of friends she cares about.  I’m close with all of my cousins as we have children close in age.  Our family is diverse- a mishmash of Tibetan, Puerto Rican, black, Japanese, Irish, and others I’m forgetting.  I hope that growing up loving people in all those different groups will do the trick.  I know that for me, loving people makes it really hard to think of them as ‘other’ and really helps to dismiss negative sterotypes.

Have your kids noticed different races?  Have they asked you questions?  How did you handle it?  Are you racist?  How do you plan to avoid passing on your biases?

One response to “The science of racism?”