How to calm a baby and/or a baby mouse

As I mom, I can attest to the fact that there have been numerous occasions where my children were crying- either in their bed, on the floor, or in the arms of another person- and the moment I took them into my arms, the crying ceased.  It’s often insulting to the person who has been holding them, but that is what they’ve done.

I’ve written before about research showing just how calming a mom can be for children of all ages- even just that mom’s voice, here.

It’s always oddly fascinating to me when research proves what we’ve always known/felt/believed to be true.

Turns out that human babies, and lots of other mammalian babies, respond similarly to being carried by their mother (or perhaps caregiver in the case of humans), by calming down. 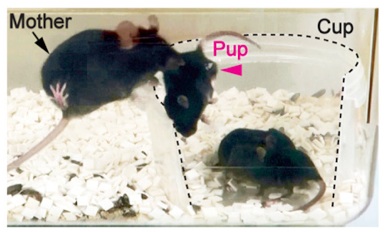 Image from Esposito et al of the ‘behavioral task of maternal rescue’ wherein Mother Mouse rescues her pups from a cup.  This is similar to humans rescuing an infant from under the coffee table or a toddler from the monkey bars at the park.

A recent paper by Esposito et al entitled “Infant Calming Responses during Maternal Carrying in Humans and Mice” published in Current Biology looked at the responses of babies (of the human and murine variety) as well as dissecting what signals actually contribute to those responses (in the murine babies).

By monitoring babies movements, crying, and heart rates (electrocardiograms) the researchers found that within seconds of being carried (not just held, but picked up and moved around) by their moms, infants’ heart rates declined, their movements slowed, and their crying diminished.  Compared to an infant laying alone in a crib, just holding the infant while the mother was seated did elicit some calming effects, but not as strongly as carrying the infant.  (I’m pretty certain that further study would show this is primarily responsible for many a parent pacing up and down the aisles of an airplane to placate a cranky baby)

The same happens to mice, and since we can do experiments on mice that we can’t on babies, researchers looked further into the murine response to see how it worked.

Turns out, mice babies cry too (Ultrasonic Vocalizations, USVs).  Just like humans, when a mouse mom carries her pup, it calms down.  In a mouse, that means the pup stops crying/making USVs, adopts a compact posture (drawing up its hind legs and being still), and its heart rate drops.  The researchers used several different techniques to figure out what cues were causing these behaviors and figured out that it was a combination of actually feeling the mother grasping its skin and proprioception (basically sensing that it is being carried).

It’s fascinating to me how behaviors and responses are shared between species. It also reminds me how primal newborns are.

However, the paper had one CRITICAL flaw.  MAJOR.  As in I don’t know how the reviewers and editor missed it.

A scientific understanding of this physiological infant response could prevent parents from overreacting to infant crying. Such understanding would be beneficial to parents by reducing frustration, because unsoothable crying is a major risk factor for child abuse [26]. Source.

To this I say, “HAHAHAHA!  Are any of you even parents?!  At 3 am when you haven’t gotten any sleep and your kid just WILL NOT SHUT UP- does the knowledge that “the identified effects of carrying on parasympathetic activation and cry reduction were significant and robust” make one damn bit of difference?!*  I think not.

If I had been the reviewer, I might have responded, “If you want those two sentences in the paper, you gotta include a figure on whether that knowledge actually mattered to any parent in the dead of night with a colicky infant.”

*I’m only partly joking.  When my kids were infants and being difficult/impossible to soothe, I did remind myself that they weren’t intentionally trying to piss me off.  I suppose this understanding of what soothes them might similarly serve as a reminder that babies aren’t out to get you on a personal level at 3am by refusing to sleep and/or let you stop pacing around and/or nursing them.

Filed under #scimom, Mother, Scientist, You might be a #scimom if