Out of the mouths of babes: Dinosaurs don’t make beds

The other day Mabel picked out a book from the library about Tyrannosaurus Rex.  It’s a little old for her:  too long, non-fiction, and lots of bloody meat hanging out of gaping jowls over bloody corpses.  She asks a lot of questions about what the dinosaurs are doing, why T. rex is biting the other dinosaurs, etc.

There was a section in the book about how tiny the T. rex’s arms were in comparison to the rest of its body.  Despite its enormity, T. rex’s arms were about the size of human arms.  Apparently (at least at the time of the writing of that book) scientists were speculating that the arms helped T. rex get up off the ground (since they couldn’t reach its mouth to help it eat).

In any case, Mabel asks to be read the book, and doesn’t seem to be having nightmares, so that’s fine.

Today I saw the following image on my Facebook feed from IFLS: 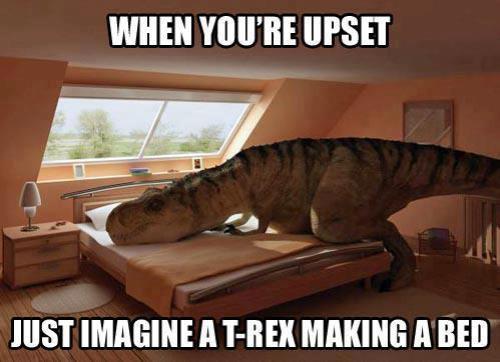 I shared it with Mac, and asked him to show it to Mabel.

Her response:   “That’s silly. Dinosaurs don’t make beds! Is that his home?”

The concise analysis of a 3 year old.  Dinosaurs don’t make beds, but they may live in houses.