A couple of weekends ago, we went to the local Grange Fair.  It was basically like a small county fair with farm animals and carnival rides and such.

It was pretty small as fairs go, and we had to pay admission just to get in, with all the rides and games being extra, however, for a 20 month old, it was the perfect size.

We were able to experience what the fair had to offer and still be home in time for a nap!

We started off the day with The Marvelous Mutts!  All the dogs are shelter rescues and their abilities are amazing!  Mabel was mesmerized and really enjoyed being able to meet the dogs after the show. 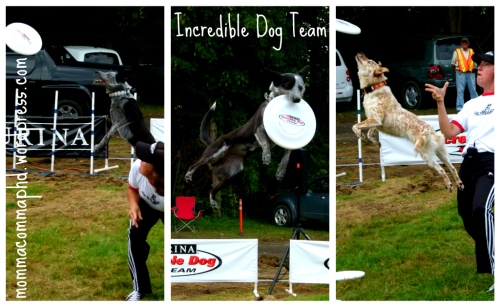 After the dog show, we checked out all the animals at the fair and got to meet some of the kids (as in human children, not baby sheep) that raised them.  Mabel even got to pet a blue chicken.  Yes, an actual chicken whose handler had died her fuzzy feathers blue.  There was also a pink chicken, but we didn’t get to pet that one.

After touching lots of animals, we washed hands and had some lunch.  There were cheese fries, gyros, pulled pork sandwiches, quesadillas, sausage and pepper sandwiches and the like.  We were too busy eating to take pictures, but it was good!

While we dined, we listened to a Southern Rock band performing and the music was too hard for Mabel to resist, so she cut loose and danced.  See videos here.

Since Mabel was too small for any of the carnival rides, after lunch we paid $3 and went on a hayride.  By this point in the day, she was pretty pooped, so you can see in the one picture below that she seems about to fall asleep on me.  But after all the walking around, it was nice to sit and relax and take in the sites for a few minutes. 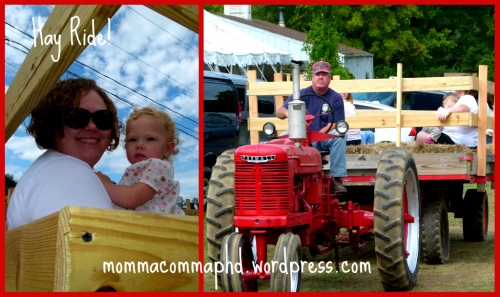 Last up were the carnival games.  Mac really wanted to play a game with Mabel, and his choice was a sure-winner:  The Lucky Duck.  Basically you pick 3 ducks from the water and depending on the numbers on them, you get a prize.  Not surprisingly, Mabel’s added up to an amount that only entitled her to the small toys.  She chose a duck. 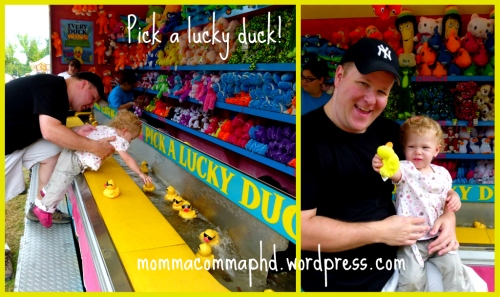 This fair was just the right size for a toddler.  Plenty to do, but not overwhelmingly large.  We’ll definitely be back next year- and perhaps Mabel will be tall enough to ride some rides!