It’s a Norwegian goat/sheep’s milk cheese.  It looks and tastes like caramel.  Yup.  Cheese that is just like caramel.  With apples it’s awesome.  It’s also rumored to make an great fondue.

I found this cheese while browsing Murray’s Cheese online.  I’ve never been to Murray’s in person, but my cousin worked there (at the Grand Central location) for a while and that’s how I had heard about it.

My husband, Mac, was having a birthday and I needed a gift.  I didn’t want to get him a random piece of electronics, or another clever T-shirt, so I racked my brain for something different that he would appreciate.  I settled on the idea of getting him cheese.  Yup.  Birthday cheese.

One of our favorite indulgences when we eat out at a fancy place is the cheese plate/board.  We enjoy trying unique, different, never heard of it, stinky, nutty, creamy, cheeses.  So, I thought, “Why make my own cheese board for him.”  So, I arranged to have my sister go to Murray’s with a list of cheeses I thought he’d like to try (from the descriptions on the website), and get a small portion of each.

I’m jealous that I didn’t go myself- she was able to sample lots of cheeses and got some of the ones on my list, as well as some others the cheese guy suggested based on the list.  We had 6 cheeses- about 1/4 pound each.

As a birthday gift, my sister got Mac a slate cheese board- complete with chalk to write the names of the cheeses.  So we presented this to him while singing happy birthday: 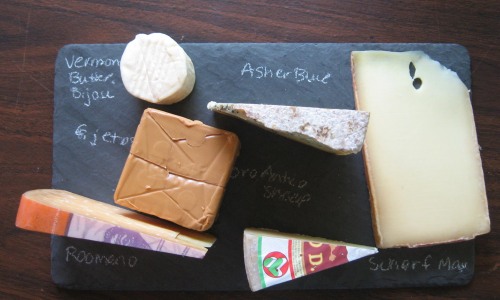 Mac’s favorite was Roomano– like an aged Gouda.  But my favorite was definitely the Gjetost-like nothing (other than caramel, of course) I’ve tried before.   I would highly suggest you try Gjetost.  It is delicious!